The store will not work correctly in the case when cookies are disabled.

Sometimes, looking along the packed shelves of honey at the supermarket can be a bit overwhelming. The honey all looks kind of the same, some darker, some lighter, some in bear bottles, others in oval containers. How are you supposed to know which honey is the best for you? Today, we are going to be going over the differences between the wildflower and clover honey varieties including a fun blind taste test to see which kind our own honey consumer prefers. A Delectable Food Source When it comes to understanding different varieties of honey, it’s important to note that the biggest difference usually relies on the producer’s food source. That’s right, the types of flowers and plants a beekeeper’s bees pollinate makes a world of difference in their honey. As you may have guessed, clover honey usually refers to honey made by bees who pollinate mostly white clove 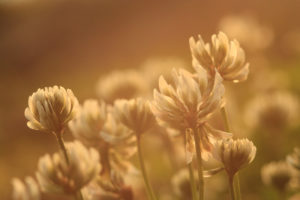 r flowers. While Wildflower honey comes from bees who pollinate a large variety of wild plants and flowers. Though clover is often thought of as a weed, and is plucked out of many hobby gardens, honey producers will set their hives near clover fields and harvest the light, mild honey. Clover attracts bees naturally, and is not hard to maintain, meaning that most clover honey is affordable and widely available in all commercial grocery stores. It is loved for its light amber color and mild, floral taste. Wildflower honey is just that—a honey derived from a variety of floral nectars. This honey’s taste can c 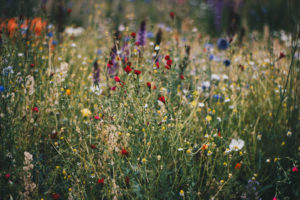 hange from year to year based on factors such as flower availability and rainfall. Wildflower is not as easily controlled as clover honey as beekeepers cannot be certain what exact flowers their honeybees are visiting, but it still offers a popular taste. Wildflower honey is usually more floral, and its darker color makes it stand out from its clover counterparts. However, the dark color indicates that this honey has a high content of vitamins and antioxidants which makes it a great choice for more health-conscious consumers.

Meet our honey aficionado—Jesse. He has been asked to try both wildflower and clover honey on top of and in his favorite foods, as well as straight off a spoon. He was very excited and was more than happy to help us with our experiment. “Honey belongs on more things” he said as we prepared for our taste test. It was obvious that no matter the outcome, he was going to have a good time.

We acquired a couple of bottles of honey from our local grocery store. We were hoping to find honey of the same brand, but the selection

for wildflower honey was a little lower, and we settled for two different brands. Both are Grade A honeys made in the USA and were priced around $6.50. As you can see, the wildflower honey noticeably darker than the clover honey. Jesse would have to blindfolded for this experience, or he’d be able to tell which honey was which on sight.

Having picked up our honey, along with some tea and biscuits to have with it, we headed back to get ready for our test. The Biscuits were made and after drizzling the honey over them, they looked positively delicious. However, the color difference became even more obvious.

With our tea brewed, it was time to get this show on the road! Jesse sat down, a pair of pajam 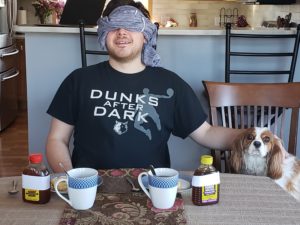 a pants tied around his head as a makeshift blindfold, and we laid our honey-infused spread before him. Even his puppy, Charlie, was excited by all the commotion. As we said before, Jesse has been consuming honey for a long time, though mostly clover honey. He told he was excited as he got ready to try some new honey. He wanted to see if the wildflower honey could win him over. He was very serious during the whole affair, telling us his exact thoughts as he tried each treat. “This one is really light, and not super sweet” He told us as he chewed on a clover honey-soaked biscuit, “But it’s really good.” The Wildflower honey biscuit, however, gained a bigger reaction. “Wow! That is super sweet! It really packs a punch, and it’s super flora

l. I can tell that’s the wildflower one.” Well, maybe the blind fold didn’t help that much after all, but it was a fun a touch. Jesse was spot on with each of his honey tastes, always picking out the correct honey used. After taking off his blindfold, we asked him which honey he enjoyed more. Surprisingly he said he preferred the wildflower honey as he dug back into his biscuit. “It is really sweet, almost like light molasses. And it seems thicker than the clover honey.” Charlie seemed to agree, as he chewed on a little piece of biscuit too. There you have it folks, the difference between Clover and Wildflower honey. While they look and taste different, as the nectar comes from different sources, they are still both sweet and delicious! If you enjoyed this, check out our awesome honey bottles.
Categories: Plastic Bottles
Tags: Honey
Posted By: Jessica Welch
Topics
Recent Posts
Archives